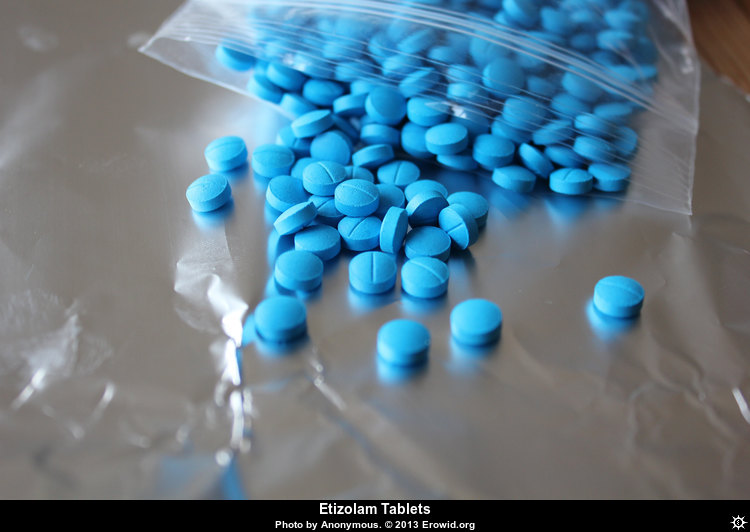 Another of the popular research chemicals available on the Internet of late is Etizolam, which is an analogue of the more traditional benzodiazepines; carrying an almost identical effect profile to its short-acting hypnotic counterparts, such as Xanax. As it stands, etizolam is one of the most popular research chemicals widely available on the Internet – despite this, it remains largely unscheduled worldwide.

The availability of etizolam in the more general research chemical scene began around 2011, and attention has only increased since. Its prevalence is probably due to both the low cost of the drug (with 500 standard doses costing around £100, and is available in bulk powder form for even less), and the highly addictive nature it shares with benzodiazepines.

Though relatively new to the recreational research chemical scene, etizolam differs from most other research chemicals in that it is actually approved and actively prescribed as a medical treatment for anxiety in many countries around the world (such as India) under brand names such as Etilaam and Etizest. Its origins as a medical drug are actually very unclear, though medical papers citing its use in the treatment of anxiety are recorded as early as the 90s. Perhaps these approved medical uses have slowed the train for countries wishing to schedule the drug for recreational use?

Despite the similar effect profile to benzos, studies have shown some major differences between etizolam and the more traditional benzos used for treatments; it suffers much less from the build-up of tolerance to the drug, and also has a tendency to almost-consistently induce the side-effect of blepharospasm (eye twitching) with continued use.

Benzodiazepines, as common drugs prescribed in many countries to combat issues such as depression, social anxiety and insomnia are also amongst the most widely abused drugs in the world. I believe the free availability of etizolam online will unfortunately only serve to ensconce more users into a benzodiazepine addiction – a powerful addiction which can be potentially deadly upon acute withdrawal.

Certain countries have recently moved to illegalise the drug, with it being scheduled in 2013 by the German government. Despite this, it remains legal in most countries.

Read more about etizolam and friends on our Wiki!

One thought on “History of Etizolam”