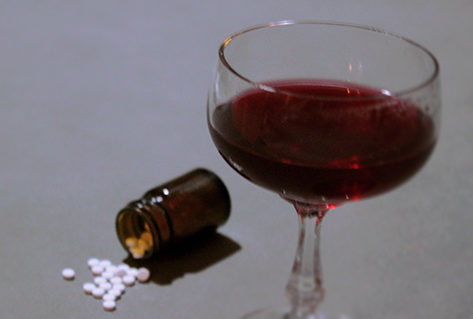 Depressants (including alcohol, opioids, benzodiazepines, dissociatives and others) are the most widely used class of recreational drug in the world. Yet, despite and perhaps due to their relative ubiquity, their dangers are often not well known and respected by users. As a result of this, depressants and combinations of depressants are the most common cause of drug-related deaths.[1][2][4][6] Here we discuss the dangers of depressant use, and explain why they are heavily compounded when used in combination with each other, and thus why such mixes should almost always be avoided.

Depressants are so named because they are Central Nervous System (CNS) depressants – which are drugs that can be used to slow down brain activity. CNS depression refers to physiological depression of the central nervous system which results in a decreased rate of breathing, decreased heart rate, and potential loss of consciousness at higher doses. In excess, CNS depression will eventually lead to coma or death.[11][12] CNS depression is specifically the result of inhibited brain activity – in this case caused by depressant drugs. In more general terms: the more of a depressant drug ingested, the weaker a person’s breathing and heart rate become; if they are slowed enough, the user will stop breathing entirely.

Heavy use of depressant drugs carries other dangers outside of direct CNS depression. A common depressant-related cause of death is aspiration – when one vomits while sleeping, cannot expel it due to a suppressed gag and cough reflex, and thus chokes on it.

In addition to the physiological dangers of overdosing on depressant combinations, users also risk damaging themselves accidentally due to reduced inhibitions and impaired motor function. Many drug-related casualties are actually those of misadventure: people getting hurt or dying during the undertaking of an activity while impaired under the influence. While blacked out on a depressants, you cannot ensure that you will not undertake a dangerous activity and endanger yourself or others.

Aside from physical harm, it also puts users at a greater legal risk. It is a popular adage that those who binge on benzos will wake up naked in a prison cell, and there is some truth to this. Benzodiazepines in particular are reported to cause certain users to act in a violent manner, while all depressants have been shown to increase tendency to engage in criminal behaviour.[9] In Scotland among the 71% of suspected criminals testing positive for controlled drugs, benzodiazepines are detected in amounts second only to Cannabis.[8]

With most depressants it’s relatively easy to dose with a good knowledge of the extent to which it will affect you, in sensory terms and in terms of CNS depression. This can be achieved by using dosage guidelines and by slowly titrating up from a lower dose until reaching the desired effects. However, the effects of CNS depressants when combined are highly unpredictable and synergistic, which will lead to problems much more easily and in a non-linear manner.[10] As such, a user combining depressants is at much more risk from the factors noted above. Depressant combinations are an extremely common cause of recreational drug deaths, and the most commonly indicated when several drugs are involved.[15]

A common rationalisation in spite of the recorded dangers of combining CNS depressants, and one of the main reasons that otherwise educated drug users continue to take these dangerous combos, is the argument that they aren’t particularly dangerous in small amounts. While this is partially true, the synergy of effects is unpredictable and thus so is the reduction in inhibitions. People who overdose on CNS depressant combinations rarely intend to, but black out on smaller doses and then redose compulsively. Thus, while the physical danger of smaller doses of combined CNS depressant combinations is relatively low, they leave users with a much greater risk of putting themselves in a situation of physical harm through unconsciously dosing more than originally intended.

Below we have summarised interactions between major depressant categories, though it should be noted that most other depressant interactions are also highly dangerous, such as GHB + others.

These drugs are one of the most commonly combined for recreational effects, however they are also one of the most prominent overall causes of drug-related deaths.[1][2][5]

The majority of depressant-related deaths involve misuse of heroin or other opioids in combination with benzodiazepines or other CNS depressant drugs. In most cases of fatal overdose it is likely that lack of opioid tolerance combined with the depressant effects of benzodiazepines in the cause of death.[3][4]

A huge number of drug-related deaths involve the combination of alcohol and opiates, most commonly heroin and methadone.[2][5]

Taking benzodiazepines on top of dissociatives is generally not known to be particularly fatal[7], since most dissociatives do not significantly lower respiration – they are actually used medically in combination for surgery anesthesia in some cases. However, the combination will almost definitely cause the user to black out, and therefore still poses ample risk towards the user through injuries from falls and movement while impaired.

Though they are not so commonly mixed, alcohol is known to be particularly dangerous in combination with dissociatives.[13]

These are a more uncommon mix, and as such there is no direct evidence contraindicating their being taken together in a short-term respect. However, we can extrapolate that taking them in combination is probably risky. There is also some evidence that Ketamine use reduces Opioid tolerance.[14]